13 Types of Talking Parrots (with Prices)

What kinds of birds talk? If you’ve ever seen a talking parrot, you were probably amazed at how smart these animals are and what they are capable of.

Some of these birds can develop an amazing vocabulary beyond simple words. A talking parrot can communicate with humans using our language in a way no other creature can.

Talking parrots are a great pet if you’re looking for something beyond the traditional cat or dog. Though there are unique challenges around owning and caring for a parrot, having a talking parrot can be an incredible experience.

Not all parrots are the same, though. As you can tell from walking around outside on any given day, there is a massive variety in types of birds, intelligence, lifespan, and other characteristics.

Choosing the right talking parrot at the right price for you is essential to maintaining a successful, long-term relationship with your pet.

Here’s some information on 13 species of talking parrots and how much you can expect to pay for them.

Not All Parrots Talk

While most talking birds are parrots, not all parrots talk. This is an important point to make as we begin. Don’t simply assume that buying a parrot will mean you’ll have a bird at home that you can speak to and ask them how they’re doing today.

If you want a talking parrot, you need to buy specific species of parrots and know that their speaking ability will vary depending on which bird you’re interested in.

What is the most talkative bird? Let’s take a look at a few options.

Parrots That Talk A Lot

The Indian Ringneck – This bird is a very clever talker, and with some training, you’ll be speaking in complete sentences with your pet as you move around the house or sit on the couch together. It’s small in stature, making it easier to own in an apartment or smaller residence.

What’s interesting about the Indian Ringneck is that it doesn’t mimic the higher pitch of a human voice. Instead, you get that lower growl of a parrot voice but with good clarity and a large vocabulary.

Indian Ringnecks are a relative bargain at anywhere from $200-$300, though rarer varieties or unique colors could cost you closer to $1200.

The lower price mixed with the vocabulary and the ability to learn new words makes these birds a great candidate for “best talking bird for beginners.”

Monk Parakeets – These are very colorful birds that are whip-smart and love to be around humans. They are known as social birds and will be happy to engage with you, your family, and your friends with a good vocabulary.

Monk parakeets are sometimes called Quaker parakeets, so know that as you look online or in pet stores. They cost around $700.

These amazing animals can go toe to toe with a toddler’s vocabulary. They can be very expressive, sing songs, and engage in witty banter.

An African Grey will run you anywhere from $1000 to $4000 depending on where you live and what legal hurdles you have to jump over to buy one.

Double Yellow Head Amazons – This bird is one of the most expensive types of talking parrots. They cost more because of their love for singing.

Just imagine being at home having your pet bird singing along as you listen to the radio or during karaoke night with friends. They’re also terrific at mimicking different human voices, which is always fun for couples and families.

These birds are super smart and great singers to boot. They’ll mimic the way you say things and their ability to nail your tone and cadence will leave you stunned.

Owners of these birds sometimes make the mistake of thinking the actual person is talking when it’s just their bird!

The Derbyan Parakeet – Derbyan parakeets are known for having excellent speaking talents.

They’re usually grouped by sellers in the same category as the Amazon parrots. The only difference here is that Derbyan Parakeets don’t learn the number of words as some other high-level speakers.

Their voices are lovely though, and if you like the way they look and you’ve got around $1500 to spend, this is a good option.

Talking Parrots That Need Some Training

Every talking parrot will do better with patient training from their owners. Some birds will take to speaking and picking up words more naturally than others.

We’ve all seen those videos online of cursing parrots or birds that seem to pick up exactly how one spouse nags the other. It’s hilarious. However, you’ll find that your bird will talk more if you train them and encourage them to speak.

Some birds will also need some training to reach their full speaking potential. Here are some great birds that need a bit of work to start talking more.

The Parrotlet – Parrotlets are smaller birds, as the name indicates. They are usually less than five inches tall and don’t weigh much at all. These tiny birds can learn to talk, but they’ll take some work.

With some time and regular practice, your parrotlet will start repeating words or short phrases.

In general, males will do a better job than females in the talking department. They cost less than $500, and you can find a bargain sometimes for around $200.

Cockatoos – Cockatoos are elegant-looking birds known for their large personalities. You may have seen them online dancing to a hip-hop song or mimicking hilarious laughs.

They don’t have the breadth of vocabulary that some prolific speakers do, but they can talk when coaxed into speaking.

You’re going to need to train your cockatoo to speak with treats and regular training sessions. Their voices, when they do speak, though, are melodic and a joy to listen to.

You can expect to pay around $2000 for a cockatoo. As you get into rarer subspecies, however, the price can skyrocket into the five-figure territory.

The Macaw – Macaws are a regular feature at zoos, bird parks, and bird sanctuaries around the world. They are typically good-natured birds known for their beautiful bright colors.

Macaws can learn up to 100 words and will mimic human language. You can count on them to chime in with words from time to time in a loud voice that’s always fun.

Macaws range widely in price but usually cost around $1000.

The Eclectus – Eclectus birds are known for their green-feathered males and bright red females. Sometimes people buy a pair just because the colors play so well together.

These birds are great mimickers, though if you want them to speak a lot, you’re going to need to buy them young and train them regularly.

It’s very hard for an adult Eclectus to pick up speaking if they aren’t started off when they’re young.

They will cost around $1500 but the rare blue Eclectus birds that come from the Solomon Islands will cost up to $20,000.

What Is the Cheapest Bird That Talks?

Of course, not everyone has thousands of dollars available to spend on a talking parrot. Some pet owners want something more budget-conscious.

The great news is that you can still find talking birds that won’t cost you thousands.

The Budgerigar – Budgies, or parakeets, are a popular talking bird that people all over the world love. It’s the cheapest talking parrot you can buy, and these small birds are great pets. With time, a Budgerigar can learn several short phrases and will repeat a surprising number of words.

They also can learn songs to sing and are fairly social birds.

These guys will cost you less than $100 usually and can be found for much less than that. You may need to ask specifically when getting a budgie because not all parakeets have the same ability to speak.

The Australian King Parrot – Australian King parrots are another lower-cost alternative for people looking for a talking bird. They go for between $100 and $500 and will need a lot of training before they’ll start talking back to you.

They are beautiful birds, though, so they are nice to look at while you’re putting in all that training work.

Cockatiels – Cockatiels are capable of talking, but they won’t learn a ton of words and their ability to speak in sentences or short phrases is pretty limited. You can expect them to say things like “Hello”, “Pretty Bird”, and other catchphrases.

Cockatiels are very social and need regular attention from owners.

One thing to note when it comes to talking parrots is that male birds are usually the superior talkers. If speaking ability is your priority, then you’re most likely better off buying a male bird.

Male birds, in many species, will have different colors and patterns than their female counterparts, so make sure you know what you’re getting in terms of looks before you buy.

Age Should Be a Consideration

The thought of owning a talking parrot can be attractive. Unfortunately, some would-be buyers and other folks who pull the trigger aren’t aware of just how long some of these birds will live.

Some birds on this list have life spans longer than humans even, so don’t go into buying a talking parrot thinking it will be a short-term commitment.

Owning an expensive Amazon bird or something like an African Grey will be decades of work and a lifelong relationship between pet and owner.

While it’s unrealistic to think that you’ll take care of a bird for 80 or 100 years, you should know that talking parrots often have to go through the stressful process of rehoming and bonding with new owners.

Other Things You Should Know

Before you sign the dotted line and buy a talking parrot, you should also know that these animals need regular stimulation and attention.

It’s not a great idea to leave an intelligent bird at home alone all day while you’re off at work. They thrive in homes and places where there are several humans or other animals that they can interact with.

Luckily, talking parrots usually get along well with dogs and other household pets.

Talking parrots can also be moody and selective about who they interact with and when they do it. We’ve discussed the social tendencies of some birds on this list, but just be aware that birds create strong bonds with their owners, and they don’t cozy up to new people quickly all of the time.

Be aware of the bird’s signals as you handle your bird or let others play with them.

Finally, the thought of having a talking parrot can be fun, but remember that these are intelligent birds and sometimes just won’t shut up!

They make a lot of noise sometimes, and it’s not always on your schedule. You can expect your talking parrot to chime in when you’re watching a movie or taking that work call at home.

If this is something you can handle, then owning a talking parrot can be a rewarding and entertaining experience. Parrot owners love their companions, and the ensuing bond can be something very special.

Do your research before you buy on what type of bird, size, and speaking ability you prefer. Once your parrot comes home, you can count on years of fun and laughs. 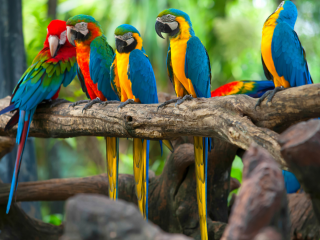