The past year-plus has been wonderful for many dog owners.

Working from home, we’ve been able to spend more time with our pets and use lunch breaks and afternoons to go on walks, toss a ball, or just snuggle on the couch.

A lot of people have gotten puppies to keep them company during the periods of lockdown and as they social distance through the pandemic.

All this quality time has left many people wondering, though, about leaving their dog home when they have to go back to work.

If you’re a Jack Russell owner, how long you can leave your dog at home has a lot to do with how old they are.

Small puppies, for instance, should only be left alone at home for a few hours at a time.

As they get older, you can train them to do well for extended periods while you’re gone.

Here we cover what you need to know about leaving your Jack Russell at home alone and how you can train them to do well by themselves.

Leaving Your Jack Russell Alone as a Puppy

Puppies need a lot of attention, and they shouldn’t be left at home alone all day without supervision.

When Jack Russells are young, they aren’t equipped to deal with people being gone all day. They’ll whine and a sense of abandonment can set in.

If they feel abandoned, they will likely act out to get the attention they crave.

That could mean you come home to chewed-up carpets, chair legs, shoes, and other items. You could find yourself in a situation where your puppy learns that doing bad things gets them the attention they want.

Instead, limit the amount of time you leave your puppy alone to no more than a few hours at a time.

Leave them some chew toys and other items to keep them engaged while they are alone. If you can’t make it home while you’re off working, then hire someone to drop in and take them for a walk.

While they’re alone, you should limit their access to areas in the home.

Leaving a Jack Russell Alone as an Adult Dog

Jack Russells are high-energy dogs that love to play and spend time with their owners.

When alone, they can have a lot of separation anxiety that makes being alone rough. Here are some tips to make things successful.

You need to teach them to be ok in a confined space. The smaller the crate is, the less likely they are to use the bathroom there.

It’s a good way to potty train them and stop them from going around the house.

Tip 2 – Dealing with whining – This is hard for a lot of puppy owners, but you have to get used to the whining.

It’s common for Jack Russells to cry and whine at night or while you’re out for the day.

You can close doors, to keep the sound from traveling as far to stop it from waking you up or disturbing neighbors if you’re in an apartment.

Tip 3 – Put on a dog-soothing soundtrack – If you’re going to be away and can’t stand the thought of your puppy whining in a crate.

You can go online and find some dog-soothing soundtracks to help them pass the time and reduce anxiety. You can also turn on the TV.

Tip 4 – Don’t Leave Stuff Out – Before you leave, make sure you don’t have shoes, clothing, bags, and other stuff you don’t want to be destroyed.

This won’t be an issue if you’re leaving them in a crate, but if they are out, don’t give them access to anything you don’t want them to have.

Give them plenty of toys to keep them occupied.

Do They Need a Companion?

Jack Russells are very loyal dogs and will form a strong bond with their owners.

A lot of owners, however, think that getting another dog to keep them company while they’re away at work is the best solution.

They can get jealous of your time and attention quickly, and when they’re alone together they can ramp each other up, which will only make them more destructive.

How Many Hours Can They Be Home Alone?

If you’ve crate trained your dog, you can probably get away with leaving them in the crate for around six hours while you’re at work or on the weekend.

If you leave them out, then that window gets cut in half.

After around three hours, they’re going to get bored and will start looking for something to keep them busy.

As you train your dog, you can see what will happen when you leave your dog alone for extended periods.

Some owners have no issue leaving their Jack Russell at home for a full day. Do it in increasing increments to see how your puppy will react.

It’s important, also, to never leave your dog alone for more than 24 hours at a time.

If you’re going to be gone overnight, consider asking a friend to dog sit or board them somewhere.

How to Keep Them Happy At Home Alone

They’re active dogs. They need exercise. If you’re going to be leaving them at home alone, you need to make sure they get plenty of energy out before you leave.

Their behavior will be a lot different after they’ve exercised.

These are small dogs, so typically a mile or two outside will keep them calm or take them to the backyard and toss a ball around to get them tired.

Without proper interaction, you could come home to missing chunks from shoes and other items.

It’s an annoyance to you, but it can also be a health hazard for your dog.

In addition to getting them exercise, you need to invest in some good chew toys to keep your Jack Russell busy.

There are plenty of affordable options online that are designed for Jack Russells that will help keep them from chewing up a purse or something similar.

These are just some of the things you should know before you start leaving your Jack Russell at home alone.

The more effort you put into early years training your puppy, the more it will pay off down the road.

Your dog will deal with your absence better and you can go to the grocery store or get to work without worrying whether your dog will make a mess or tear up the house.

With the right amount of exercise, attention, and training, they will be an amazing companion to you and your family. 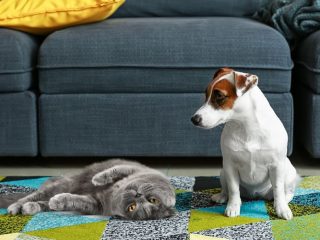 Can a Jack Russell Kill a Cat?
← Read Last Post